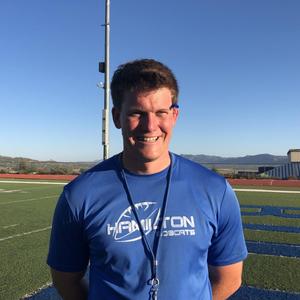 The Governing Board of the Hemet Unified School District, on nomination by Trustee
Megan Haley, has selected Patrick McGowan, Teacher at Hamilton High School, as the November recipient of the Governing Board Recognition and Award.
Mr. McGowan received his Bachelor&#39;s degree in Mathematics from the University of La Verne in July 2014. He received his Master's degree in Education in August 2016, also from the University of La Verne. Mr. McGowan was hired in August 2016 to serve at Hamilton High School. He holds a Single Subject - Math credential and is in his 6th year of teaching. He taught for one year at Bonita USD before coming to Hemet.
Mr. McGowan is an extremely valuable member of our Hamilton High School team. He cares deeply about the success of our students, school, and community. He is a teacher, coach, mentor, leader, and role model for all of our students. He currently serves on numerous leadership committees including our Equity Leadership Team, BARR program, Risk Review Team, Gear Up Intervention Team, and he is a grade-level lead just to name a few.
He coaches several sports programs at Hamilton High and if he isn’t coaching he is cheering on the other programs as well. He is willing to sacrifice his time and efforts to be on all of these different programs because he wants to help, support, and influence our school to result in better outcomes for all of our students. Hamilton High School is extremely lucky to have Mr. Patrick McGowan on our team and we are very thankful for all of his contributions.
For outstanding performance, professionalism, and loyalty to the Hemet Unified School District, Trustee Megan Haley presented Mr. McGowan with the Governing Board Recognition of Excellence Award and a $500 certificate to be used toward the District program of his choice.
Published November 23, 2020 Print